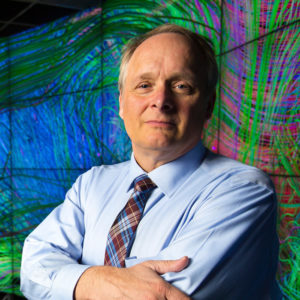 Prior to assuming the role of dean in July 2007, Nelson was head of the computer science department. In 1991, he founded UIC’s Artificial Intelligence Laboratory, which specializes in applied intelligence systems projects in fields such as transportation, manufacturing, bioinformatics, and e-mail spam countermeasures. He has published more than 100 scientific peer-reviewed papers, and he has been the principal investigator on more than $40 million in research grants and contracts on issues such as computer-enhanced transportation systems, manufacturing, design optimization, bioinformatics, and engineering education. These projects have been funded by organizations such as the National Institutes of Health, the National Science Foundation, the National Academy of Sciences, the U.S. Department of Transportation, and Motorola. In 1994 and 1995, his laboratory, sponsored by the Illinois Department of Transportation, developed the first real-time traffic congestion map on the World Wide Web, which now receives more than 100 million hits per year.

Nelson is co-principal investigator on an ongoing five-year NSF project that seeks to recruit talented students from lower-income households to pursue engineering and computer science majors and give them the resources they need for success. In addition to his responsibilities as dean, Nelson serves as advisor and mentor to 18 computer science undergraduates.