And you know what? I did it. 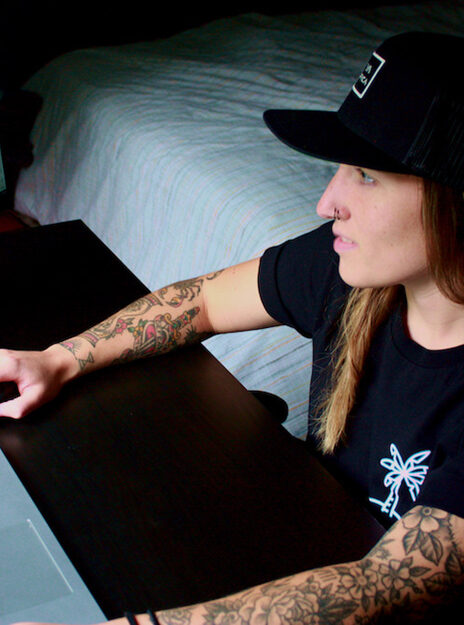 Let me set one thing straight: I never wanted to go to college. I got waitlisted at my top pick, the nursing program at Marquette University. Deadlines were coming up, so I had to figure something else out. I chose a random school to apply to, along with a random degree. I chose computer science because I knew that I could easily use a computer, and I was interested enough to learn more about them. I started to attend the University of Arizona for a bachelor’s degree in computer science.

I battled some mental struggles due to moving so far from home at age 18. After two weeks of being in Arizona, I dropped out and packed everything up. I went to UPS and shipped all my belongings back home. I didn’t end up going to school for the rest of that semester. I was terrified, to say the least. I had no idea what was ahead of me or what I’d even be doing with my life.

A semester later, I started general education courses at a community college and eventually continued my bachelor’s degree in computer science at UIC. I was starting to see how hard this degree was, and I noticed the small number of girls in my classes. I also noticed myself getting frustrated when I couldn’t get a program of mine to work or when I couldn’t understand a concept in class. The degree only seemed to become harder and harder. I kept thinking about possible changes of major. The degree was constantly pushing me to my limits.

After one of my lecture classes, an old professor of mine stopped me. He said, “Hey, I’m going to be sending your name in for the Grace Hopper Conference. I just wanted to let you know!” I was instantly excited, and I had no idea what he was talking about. Later that day, I did some research and found out that Grace Hopper was the world’s largest gathering of women in technology, including special programs for college students. I felt special, but I wasn’t sure if I wanted to attend a conference. I worked two jobs while in school, and it wasn’t easy to think about taking time off when I needed some sort of income. My discouragement set in again, and I didn’t go to Grace Hopper.

Next year, I decided to take the leap. My professors announced that enrollment for Grace Hopper was low and encouraged all of the girls in CS to attend. It was in Orlando, Florida, that year, and I thought, why not. Sure enough, I ended up going. The conference was like tech heaven: all of the big companies coming together to support women to keep at their degree or job in tech. It was awesome, and I told myself, “Next year, I’m going back.”

Getting my degree in CS drove me to work past my limits. It drove me to find patience in the toughest times and in the toughest things. For me, being a woman in tech is truly rewarding. There is no better feeling than solving a problem you have been stuck on for a few days, a few weeks, or even a few months! There is also no better feeling than solving that problem and being the only female in the meeting or classroom.

Being the only girl intern at a software-testing company made me want to show every male executive at the company that a girl can code, too. And, guess what? I did just that. I coded a revenue macro for the accounting team. I took their manual four-day process and automated it into a two-minute process. To this day, four years later, the company still uses my macro for its employee pay process.

Computer science and tech have made me feel invincible. I want other women to feel like this when they join the tech world or any other male-dominated career or activity.

Since graduating from UIC, along with working a full-time job at a software-testing company, I have used my free time to start my own business, Clutch. Clutch sells clothing and accessories to support women in tech and in other venues where they are underrepresented. We donate to nonprofit organizations that support women, and we work to create a feeling of invincibility among them. We strive to create a community where we girls can come together and lift one another up.