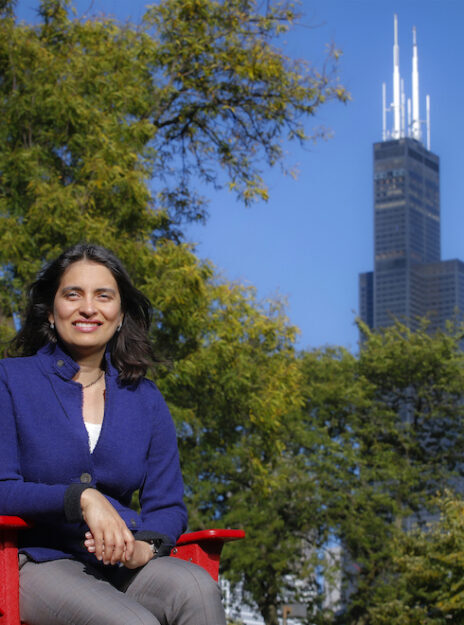 Shetty, who started as director of Break Through Tech Chicago on September 16, has more than two decades of experience in leading strategic initiatives, executing strategy, and mobilizing change in large and startup organizations.

“There are a lot of levers that are used to address the gender gap in tech, but the question is: where can you achieve sustainable change at scale? For me, Break Through Tech offers that potential, which exists at the intersection of academia and industry,” Shetty said.

Shetty comes to UIC from GATX Corporation, a railcar leasing company, where she was most recently the senior vice president of business development. At GATX, Shetty enabled a growth and diversification strategy by identifying and pursuing investment opportunities with scale. She was the co-founder and leader of GATX’s Women in Leadership, an employee resource group dedicated to achieving gender equity and a culture of inclusion in the workplace. Prior to GATX Corporation, she worked at General Electric in several business units, including GE Capital, GE Corporate, and GE Transportation. She spent her early career at Painted Word Inc., a startup technology consulting firm.

An equally important part of Shetty’s career has been her volunteer work. She mentored women from under-resourced backgrounds in India with the Shanti Bhavan Children’s Project, is a partner at Social Venture Partners Chicago, supports women-led socially conscious entrepreneurial ventures via SheEO, and is a long-term advocate of Reading in Motion’s literacy programs for children.

Shetty’s volunteer work in India demonstrated how a small investment could have a dramatic impact on women’s lives.

“Be it in India or frankly anywhere else on this planet, sometimes it doesn’t take a lot to pull women forward.”

“It’s creating choices, having a voice at the table, being able to control what you want to do; it’s really that empowerment.”

Shetty understands firsthand the importance of investment in individuals. She recognizes the impact of people who bet on her own academic and career potential: she received a scholarship to pursue an undergraduate degree in civil engineering and, later in her life, was offered “stretch roles” that helped her grow as a leader. She described both of these as “huge enablers” in her career.

What intrigued Shetty about pursuing gender equity in tech was a look at the supply and demand side of the skills required in today’s workforce, namely competencies in technology.

“More than half of the graduating students in the United States are women, but such a small percentage of them have degrees in computer science and that trend has been steadily declining over the last 30 years. Meanwhile, computing jobs are steadily growing,” Shetty said.

Shetty aims to equip more women to take these high-paying, in-demand jobs and sees Break Though Tech as a critical enabler in transforming economic outcomes for women. Break Through Tech’s program focuses on “3Cs,” curriculum innovation, career access, and community-building, and seeks to generate interest, develop a sense of belonging, and address systemic inequities to lower the barriers for women, especially women of color and first-generation college students. It is an initiative of Cornell Tech and supported by Pivotal Ventures, the Cognizant U.S. Foundation, and Verizon.

“We want to make sure we can get women into the pipeline, have them stay in the pipeline, and work to find out if they’re leaving, why,” Shetty said.

“We want to be there every step of the way.”

In addition to her role with Break Through Tech, Shetty is an adjunct lecturer in UIC’s College of Business Administration, where she teaches graduate-level analytics strategy. She also is designing and delivering executive education for the Diversity, Equity and Inclusion Leadership Institute at the Loyola University Chicago Quinlan School of Business.