A big “YES” to computer science changed my life 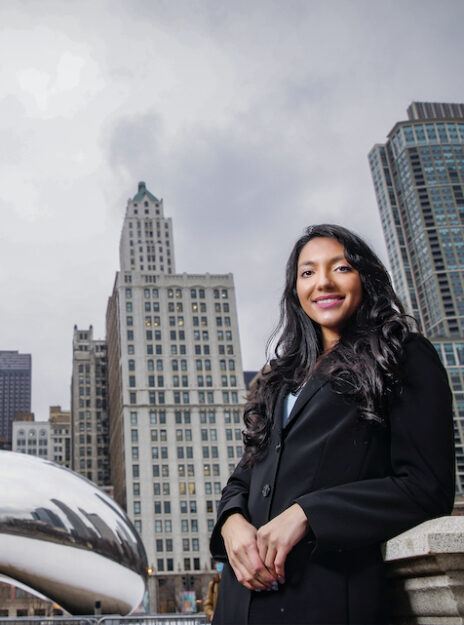 I had just finished my math placement test as I began my undergraduate enrollment at Ithaca College. I sat outside my newly assigned advisor’s office, eagerly waiting for my name to be called for our discussion about my academic major.

He signaled me in, and I sat in front of him, searching his face, as he reviewed my math placement scores.

“Perfect score!” he exclaimed. “You should consider joining my department: computer science.”

I had not yet decided on a major, but flattered by the compliment — and feeling empowered that someone other than my own parents believed in me — I thought why not, and said “YES!” on the spot.

Little did I know that this chance encounter, resulting in my spontaneous decision to go into computer science, would be a pivotal moment in my life and open many doors for me in the future.

Born in Sri Lanka, I was 3 ½ years old when I came to the United States as an immigrant with my mother to join my father, who had ventured ahead of us. My mother is Russian, and my father is Sri Lankan. They met in Tbilisi, Georgia, where my dad had received a scholarship to study electrical engineering. He spent a year learning Russian and then ended up in my mom’s class. They studied together, fell in love, and then married, settled, and started working in Sri Lanka, where my mom learned to speak the local language, Sinhala. Then they came to the United States in pursuit of better opportunities for our family. They both enrolled in graduate studies, my father in systems engineering and my mother in computer science. English, the language of instruction for those programs, was a third language for both of them. Relentlessly persistent, my parents worked hard to achieve the American dream and give me the opportunities I have had. I was highly motivated to make my parents proud after watching their lifelong sacrifices.

In my undergraduate computer science class at Ithaca, I was one of three girls. I spent many late nights trying to debug and compile my code, and many early mornings in the professor’s office asking for additional clarifications. Via an elective Psychology 101 course I chose, I uncovered my passion for the human mind, human-to-human interaction, and human-to-computer interaction. I ended up graduating with a double major in computer science and psychology.

As a sophomore, I was fortunate to receive an internship with Lawrence Berkeley National Laboratory, where I had a rare opportunity to work with a team of physicists to visualize subatomic orbitals. This internship experience helped me to secure a senior-year internship with GE, where I was recruited to the two-year Digital Technology Leadership Program. After completing that program, I worked at GE Healthcare for three more years, pretty much around the clock between the United States and global teams across Europe, Asia, and Latin America. I started as a senior analytics engineer and was quickly promoted to technical product manager of business analytics. While at GE Healthcare, I had the opportunity to work with many data scientists and build technology solutions that improved patient outcomes. This helped me realize my passion for data science and led to my decision to go to graduate school full-time to deepen my technical expertise.

I completed a Master of Analytics degree from Northwestern University, which gave me the chance to deepen my knowledge of data science and learn exciting new skills in artificial intelligence (AI). It was challenging going back to school after five years of working, trying to remember things I learned in high school and undergrad that I now needed to build on. After I failed an exam in my first semester, I asked a PhD student to tutor me. A few semesters later, I had gone from struggling to keep up to placing second in Northwestern’s hackathon. I even wrote an essay titled “Should Chatbots be Held to a Higher Ethical Standard Than Humans,” inspired by my text analytics class, and it got picked up for publication in a book: 97 Things About Ethics Everyone in Data Science Should Know. After graduation, I received several job offers and finally decided to take my dream role as the head of Kavi Labs at Kavi Global.

Every day in Chicago’s growing technology hub brings a new set of fun challenges. As head of Kavi Labs, I truly enjoy working with different industries and functions, advising on the best way to solve their business problems with AI applications. Healthcare remains a passion and priority of mine. I have a great team (proudly 50 percent female!) that is deep into emerging tech research, using partnerships with several research institutes and universities to build intelligent clinical applications to deliver better care. After submitting five grant proposals, we were finally awarded seed funding to build out a novel clinical application to recognize pain during fetal surgery from 4D ultrasounds, using computer vision.

Of course, I was fortunate to have many advisors who coached, encouraged, and pushed me to get where I am today. I also learned from those I admired from afar, like Sirimavo Bandaranaike, the leader of the Sri Lanka Freedom Party and the first female in the world to be elected a head of government. Having female advisors and role models is important for the development of future female leaders. Women have been found to be more empathetic and flexible and to have stronger interpersonal skills than their male counterparts, resulting in a more inclusive, open, consensus-building, and collaborative leadership style. Inspiring and motivating team members in a nurturing way can help individuals to self-actualize and reach their full potential. I myself am a servant leader, in the sense that I live to support the team, breaking down obstacles and enabling them to focus on what they do best.

To pass on a few kernels of wisdom that I found enlightening along my journey thus far:

All that I have learned and accomplished thus far would not have been possible if I did not say “YES!” to computer science! You, too, can become a female leader in tech and pave the way for others to change the world. Commit yourself wholeheartedly to continuous education and take initiative to become your best self through a variety of hands-on experiences.