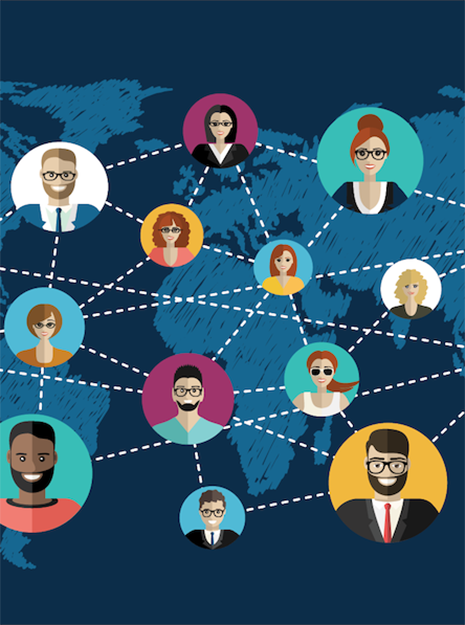 In an introductory UIC computer science course called CS 100, Break Through Tech Chicago students simulated a "network" to learn about the history of the internet.

The Internet is pretty old at this point.

It began more than 50 (!) years ago as a U.S. Department of Defense project, students in Break Through Tech Chicago’s introductory computer science course learned. Back then, it was called ARPANET, short for Advanced Research Project Agency Network.

The idea that drove the Internet’s ancestor was creating a communication system that would withstand a nuclear attack. One of its primary advantages: messages could be broken up into blocks and sent to their destinations as fast as possible in every direction through a mesh network.

Networks can be hard to envision, so Break Through Tech Chicago students spent some time “playing” network in class.

Each student represented a node, or computer, on a network. They got into groups of eight, creating an imaginary eight-computer network. In each interaction, they were able to “talk to” two out of the seven other computers, asking about the cost and speed of sending information through them. They then had repeated interactions with other pairs. Put together, the information they collected revealed an important piece of information for any user: the best or cheapest path for sending their data across the network.

Jinying Dong, who is entering her sophomore year at UIC, hadn’t considered taking computer science classes before Break Through Tech Chicago. The CS 100 experience changed her long-held beliefs about the subject.

“I didn’t like computer science since I was in elementary school,” said Dong, who created a gaming app as part of the course and plans to invite her friends to play online with her. “I thought it was difficult and complicated, so I didn’t want to learn about it. But after I took this course, I found out how interesting computer science is.”