CS 111 students ‘put it all together’ with micro-motion projects 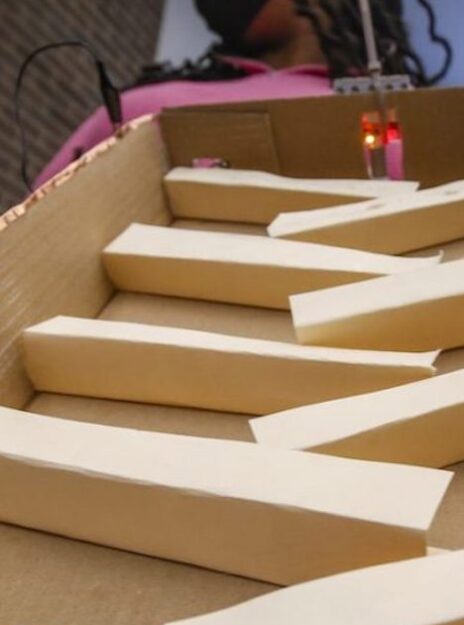 It's the ultimate group project: designing a massive machine, with each component designed by one student, that performs one continuous chain reaction. Find out how students in UIC's introductory programming course did it.

We all have to start somewhere.

The class is meant to be foundational — introducing problem-solving through programming — and fun.

This spring, students in a section of CS 111 taught by Dale Reed created an elaborate computer science-based Rube Goldberg machine.

These machines, classic versions of which involve a small ball cascading through various mazes, tubes, and pulleys to produce surprising and comical chain reactions, were inspired by the work of Rueben Goldberg. He was a cartoonist and inventor known for drawing wild inventions that solved simple tasks in the most overly complicated, inefficient way possible.

In Reed’s class, CS 111 students created pinball machines, loops, bowling alleys, garage-door openers and other devices, each of which had a simple goal: to move for three to 10 seconds and end with a radio signal that would trigger the next device in the chain. Students achieved this with micro:bits, Internet of Things devices that are half the size of a credit card and that can be programmed to respond to sensor inputs and control small motors.

Each student submitted pictures of their device, an explanation of what they do, and a screenshot of the code they wrote to make the device go. Reed helped the students to connect their individual devices together to complete the Rube Goldberg machine.

Ciara Taylor said an aspect of Reed’s class she appreciated is that many of her classmates were encouraged to take the course by Break Through Tech Chicago, and therefore the class had a high proportion of female and nonbinary students, many of whom were making their first foray into technology.

“I was surrounded by people who looked like me, were around the same level as me, and were also trying to see what computer science is all about,” Taylor said. “I loved how creative the projects were. I would recommend this 100 percent to any woman or nonbinary person curious about computer science.”

Reed said that part of the magic of CS 111 is seeing how programming can create products that are helpful and real.

“Students are motivated by interacting with the physical world, thinking about how controlling computers can help them do things, and not just exist behind the screen,” he said.

Students who are interested in experimenting with programming are welcome to apply for future editions of CS 111 with help from Break Through Tech Chicago. To get started, email btt@uic.edu.