A degree program that speaks her language 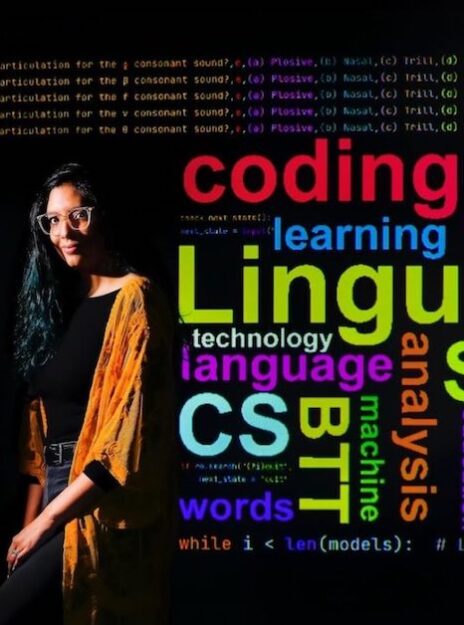 At Break Through Tech Chicago, we often point out that computer science pairs well with almost any academic focus. UIC student Danielle Cartagenes found that magic pairing with linguistics, an area of study offered by UIC's College of Liberal Arts and Sciences.

Sometimes, the best route isn’t always the fastest. It takes time to find a good fit.

Danielle Cartagenes, a first-semester senior in UIC’s computer science and linguistics program, said that until recently, she didn’t consider herself particularly good at school. But since transferring to UIC and changing majors, she now views herself as driven, goal-oriented, and a bit of a nerd in her zest for learning.

In the past few months, Cartagenes gave a top-scoring presentation in the linguistics department, accepted a summer internship, and was selected for a highly prestigious, competitive undergraduate research program.

Cartagenes, 30, moved to Chicago a few years ago from upstate New York with her husband. She already had obtained her associate’s degree and thought about pursuing a degree in anthropology.

After taking some time off school to focus on herself and her mental well-being, she changed course and decided to study computer science, a field where she could find a well-paying job with an undergraduate degree. She took some computer science courses at City Colleges of Chicago, then enrolled at UIC.

Last fall, Cartagenes heard about a new UIC major: computer science and linguistics. Housed in the College of Liberal Arts and Sciences and offered in collaboration with the College of Engineering, the major seeks to meet an increasing demand for programming skills in disciplines that include an aspect of language, including speech recognition, human-computer interaction, and natural language generation.

It was the combination Cartagenes had been looking for.

“The computer science major was all math and science with nothing to balance it out, and I missed taking humanities classes,” she said. “This major didn’t exist when I transferred. I’ve fallen in love with this interdisciplinary program.”

Cartagenes recently gave an award-winning presentation in the linguistics program about a game-playing linguistic chat bot focused on the International Phonetic Alphabet, or IPA, an alphabetic system of phonetic notation that represents human-specific sounds present in every language.

“I made games where you transcribe a word into IPA or vice versa, one where a symbol is provided and you describe where in the mouth it’s created, so the place of articulation,” Cartagenes said.

This month she has an internship: a Break Through Tech Chicago Sprinternship, to be exact. She is working at Adams Street Partners, a private equity firm.

After the Sprinternship, Cartagenes will head to Baltimore. She is one of six students chosen from 125 applicants to participate in Johns Hopkins University’s JSALT 2022 Summer Research for Undergraduates program, where she’ll work on a project titled Recognition of Multilingual and Code-Switched Speech. Assistant Professor Natalie Parde recommended her for the program.

“It’s an extremely great program to get into,” Parde said. “I’m really impressed with her.”

The Johns Hopkins project is exploring novel techniques to build large vocabulary continuous speech recognition systems capable of understanding both individual languages and switching between languages, or code-switching. This is common in people who are multilingual. The study will focus on widely used languages, such as Arabic and English, as well as minority languages of English-speaking countries, such as Gaelic and Maori, indigenous languages of the United States and Canada, and sub-Saharan African languages such as Xhosa, Yoruba, and Zulu.

Cartagenes understands how difficult it is when home assistants such as Google Home, Alexa, and Siri don’t recognize changes in languages. Her parents are Brazilian, and she speaks Portuguese fluently.

“Syntax has been my hardest class,” she said. “Say you are switching from English, which is subject-verb-object, to Japanese, which is subject-object-verb. If it’s hard for us to do that, imagine how hard it is for a computer. They are only as smart as the people who program them.”

In her spare time, Cartagenes teaches a Latin dance class at the UIC student recreation center, takes singing and vocal lessons, and is into making soaps and sugar scrubs. This fall, she hopes to continue work on her chat bot, adding a smoother user interface and bringing her game online.

As for her plans post-graduation, Cartagenes is uncertain.

“I hadn’t thought about grad school, but I’m not closing any doors anymore,” she said.